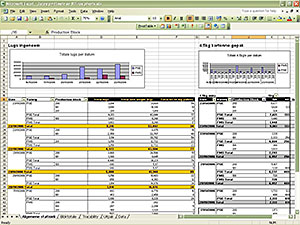 Life has just become a whole lot easier for ViTrax users. Using MySQL, ViTrax data now can be accessed by Microsoft Excel at lightning speed – thus making the system infinitely more flexible. Furthermore, the system can be customised according to a user’s requirements, for example management reports.

Live graphs and Excel pivot tables and charts can be drawn up and will be updated as data changes. These tables may be used as management tools without necessarily having knowledge of ViTrax.

According to Farsoft client manager Stefan Strydom, the major benefit is that fields can be merged and deleted – no special reports are needed. He reported that a number of ViTrax users are absolutely over the moon about the ease of this enhancement.

Said Jean Pierre Pellissier, operational manager of Valley Packers, “The power of pivot charts was grasped quickly by people at grassroots level and we all bought into it. While ViTrax captures data, Excel is used for reports. We used to waste much time on summarising data before this added feature.”

“Using pivots is one the most versatile tools one can use in interpreting intricate data in the fruit industry,” commented Gideon van den Heever of Ceres Koelkamers. “It allows the user to manipulate data according to their needs. Sharing data between various parties, such as cold store to agents, also is much more simplified, as it allows the receiver to see a logical data display. I would strongly recommend the introduction of pivots to all cold store/pack house managers. Individual staff members and the company certainly will benefit.”

According to Justin Mudge of Chiltern Farms, the beauty of SQL and direct queries really come into their own when used in conjunction with RF scanning. He continued, “It gives us real-time data that we can use for monitoring progress on specific orders. It also has helped us to improve packer productivity because we can get real-time data on cartons packed per packer.”

Mudge said the time saved was the most important as one needn’t reformulate a query every time for information required on a routine basis. “It has helped us considerably to ensure that the data we capture is accurate and up to date, plus it gives us the ability to process large volumes of complex data with great ease.”