It all started at Karsten Farms 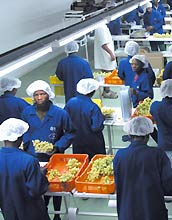 When Babsie Karsten of Karsten Farms contacted her children’s former computer studies teacher, Freddie Roux , to write a packhouse programme, little did she know that she was the initiator of the acclaimed ViTrax programme. The latter is Farsoft’s fresh produce data capturing and management tool offering complete pack house solutions – from accurate recordkeeping and reporting to bin intake and pallet consignment.

Founder Freddie Roux noted that it wasn’t his intention to start ViTrax as such. “My intention was to fill the gap I saw in the agricultural environment for systems development. This broad vision narrowed down as we became more specialised. Our first system was in the wine industry, in which we’re still involved.”

Babsie explained that as financial manager in 1996, she realised that computerisation was required for the growing business. ” Freddie identified what was needed and wrote a programme to meet the business requirements. After that, the programme was adapted and extended annually. We’ve built a strong relationship with Farsoft over the years and to this day, these programmes fulfil vital functions in the business.”

Current Farsoft programmes at Karsten Farms include packhouse and pallet tracking systems, while some pack houses will start using R/F scanning in the coming season.

In 1968, Piet and Babsie Karsten started farming on Kanoneiland and twelve years later they bought the farm Roepersfontein. This is now the head office of Karsten Farms (Pty) Ltd, a conglomerate of seven fruit farms. Each farm comprises an independent production centre with a complete packing line for every 40 ha of table grape vineyards. An apple and pear farm was added in 2000 in the Ceres area with 132 hectares of orchards.

Of the 589 ha, 477 ha has table grape plantations, 89 ha produces dates, 23ha of sweet and water melon, while the balance is used for crop rotation.

Freddie Roux had the last word, “The people at Karsten Farms are role models in business with respect being the hallmark of their business dealings. We’re honoured to play a small part in the growth of this successful organisation.”